A Brief Account of the Destruction of the Indies 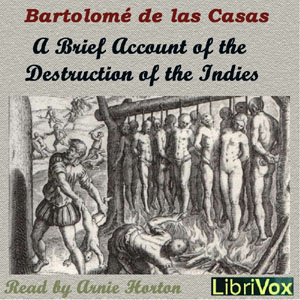 A Brief Account of the Destruction of the Indies

LibriVox recording of A Brief Account oof the Destruction of the Indies, by Bartolomé de las Casas.
Read by Arnie Horton.

A Short Account of the Destruction of the Indies (Spanish: Brevísima relación de la destrucción de las Indias) is an account written by the Spanish Dominican friar Bartolomé de las Casas in 1542 (published in 1552) about the mistreatment of the indigenous peoples of the Americas in colonial times and sent to then Prince Philip II of Spain. One of the stated purposes for writing the account is his fear of Spain coming under divine punishment and his concern for the souls of the Native Peoples. The account is one of the first attempts by a Spanish writer of the colonial era to depict examples of unfair treatment that indigenous people endured in the early stages of the Spanish conquest of the Greater Antilles, particularly the island of Hispaniola. Las Casas's point of view can be described as being heavily against some of the Spanish methods of colonization, which, as he describes, have inflicted a great loss on the indigenous occupants of the islands. (Summary by Wikipedia)

Uploaded by librivoxbooks on July 1, 2013